In Tuesday’s Interstate Eight road victory over Charlotte, every player on Marshall’s roster scored at least one point.

The Class B Honorable Mention Redhawks held an 18-0 lead after the first quarter and cruised to a 56-12 victory to improve their record to 9-1 at the halfway point of the season.

Leading Marshall in scoring was Georgianna Pratley with 13 points, followed by Carlee Long with 10 points.

Jill Konkle and Nikki Tucker each had seven points, and Natalie Tucker led the Redhawks with eight rebounds.

In the girls poll, which came out Monday January 18th, Marshall (8-1) received honorable mention in Class B for the second consecutive week after the Redhawks held off Jackson Northwest in an Interstate Eight Conference thriller. 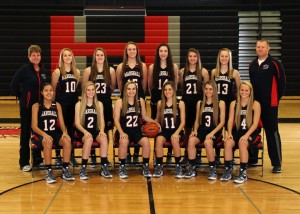