MARSHALL SPORTSFEST: The host Redhawks (2-4) won their own tournament, defeating Parchment 4-1 and Hartford 17-6. In Game 1, Drew Devine got the win on the mound after four innings of work, allowing one hit and one earned run. Devine also helped himself out with two hits and an RBI in the game, while Logan Austin and Tyler Weck each had a hit and an RBI. In the championship game over Hartford, Kyle Veich picked up the win. At the plate in the finals, Weck led the way with four hits, three runs scored, and two RBI, while Scott Reigle had two hits and three RBI, Devine had two hits and two RBI, Jarrett Deland had a double and two RBI, and Trevor Greenwood had a double and an RBI. 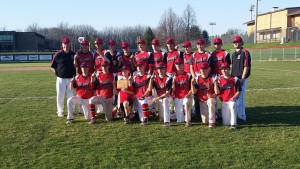