Thanks to Travis Tekiele….from the Battle Creek Enquirer

MARSHALL – The Redhawk soccer team won its own tournament on Saturday at the Marshall Sports Festival.

In its opening contest, Marshall defeated Vicksburg by a score of 5-1, and then shutout St. Joseph, 3-0, for the championship.

Kate Face scored two goals in the win over Vicksburg, while Gabby Hoffman, Sara Townsend, Abbie Hershock each had one goal. Face and Cara Gallighugh each had two assists in the victory, while Lauren Terry, Jill Konkle, Sam Onkka, and Carlee Long each had one.

The Redhawks then advanced to take on St. Joseph, where goalkeeper Macy O’Dell earned the shutout. Face scored two more goals in the finals victory, while Townsend scored one. Carlee Long, Taryn Long, Terry, and Townsend each had assists in the win.

Saturday’s wins were the first of the season for Marshall, who now sit at 2-3-2 overall. 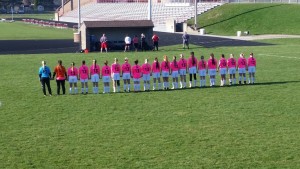 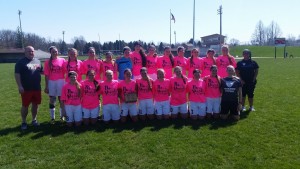 The Redhawks honor Kari Jolink by wearing #13 Pink “No Regrets” jerseys for the 2016 SportsFest.