The MHS Wrestling team held its awards banquet Sunday March 26th. The team finished with an 18-14 record, the first time being over .500 in quite a few years. It also included a tournament championship at Comstock and runner up at the Joe Wheeler Invitational. The team also earned academic all state honors.

Three wrestlers made their mark on the career pins top ten list as Corey Dexter, Owen Miller, and Brendan Hankey all made the list. Owen Miller set the single season record for pins with 38 this year.  Corey Dexter and Owen Miller also both recorded their 100th career victories. 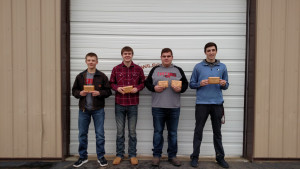