The Marshall Boy’s Swim Team took 7 swimmers to the MISCA meet this past Saturday to compete
against some of the best teams in the state from all divisions. There were no points or team scores kept,
but Marshall had an impressive outing. The highest placing relay for Marshall was the 200 Free Relay
team of Juul Loonen, Landon Morgan, Nate Turner, and Jack Vezmar that finished 6th. The highest
placing individuals were Juul Loonen in the 50 Free and Tommy Huyge in the 500 free in which both athletes
finished 8th earning medals. Also on the day, Landon Morgan obtained his state qualifying time for the 200 Individual Medley. Great Job by all athletes! 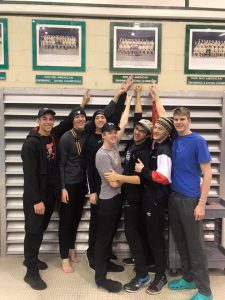