In the Semi-Finals, Marshall outlasted Coldwater 7-4.  In the District Championship game, the Redhawks came out on top of Pennfield 8-7.  In the Championship game, Pennfield took a 5 run lead in the top of the 1st inning.  Then in the bottom of the 2nd inning, Marshall bounced back with 7 runs of their own.  Trenton Fuller and Odie Butler each singled to start the 2nd inning.  Then with 2 outs, Wyatt Gillum tripled on a gap shot to left center knocking in 2 runs. Thomas Andalon singled and Gillum scored.  Rickey Nye singled and Felipe Martinez reached on an error.  Justin Hankey also singled to load the bases.   Next, Fuller doubled to deep left center field to knock in 3 more Redhawk runs to give Marshall a 7-5 lead.  The score remained the same until the top of the 6th when Pennfield scored 2 runs to tie the game.  In the bottom of the 6th inning, Thomas Andalon led off with a walk. Rickey Nye reached 1st on a drag bunt single, as did Felipe Martinez.  Trenton Fuller then knocked in the Redhawk’s 8th run to give Marshall a 8-7 lead heading into the top of the 7th inning.  Pitcher Odie Butler set the Panthers down 1-2-3 to secure the MHSAA District Championship!  In this game,  Fuller lead offensively for the Redhawks with 3 hits and Nye and Butler each with 2.  Blake Patterson pitched 4 innings giving up no earned runs as did Martinez with his 1 inning of work.  Butler picked up the win while striking out 2.

Marshall advances to the MHSAA Pre-Regionals @ Coldwater on Wednesday June 5th @ 6:00 p.m. vs. the winner of the South Haven District.  Marshall’s overall record is now 24 wins and 8 losses. 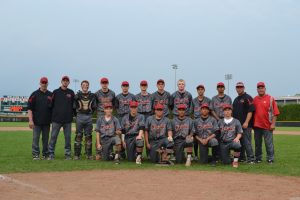