The Redhawks traveled to Zeeland hoping to have a record setting day, and they didn’t disappoint.  All five boys that went to the meet made All State in at least one event.
Jake Lyon made All State in the long jump for the second consecutive year finishing in 7th place.  Jake was also regional and league champ in the event.  Jack Luciani clinched his second All State performance in the high jump with a jump of 6′ 2″.  Jack was also league champion in the event.
The boys 3200 Relay team came into the State Meet undefeated on the season, and came through once again.  Jake Lyon led off in 2:01.4, followed by George McClure who ran a career best 2:00.8 split.  Tyler Tucker also ran a great leg with a personal record 2:02.8, and Perry Robson anchored the team, also in a PR of 1:58.1.  The boys lowered their own school record for the 5th time, this time by a whopping five seconds, finishing in 8:03.55
After the third lightening delay of the day, the boys 1600 Relay team had their chance.  Starting the race at 9:40 pm, five hours after the scheduled start, the boys came through once again.  George led off in 52.4, followed by Jack in 51.9.  Perry ran the third leg in 52.6, with Jake anchoring in 49.3.  Their finishing time of 3:26.32 was the second fastest in school history, and earned them a spot on the podium.
Olaide Olapade finished her career as the most decorated female sprinter in school history with a 12th place finish in the 100 Meter Dash.  She missed making All State by a mere .09 seconds.
It was an amazing day for these outstanding track athletes. 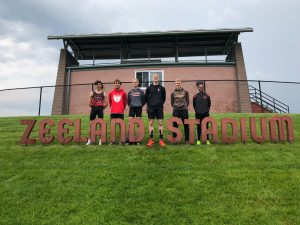