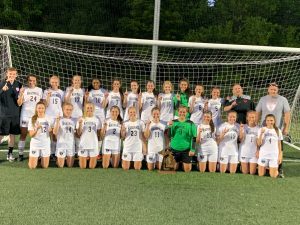 The girl’s Soccer team made history Friday night winning the school’s first ever Regional Championship by defeating Gull Lake 2-1 (SO).

The score was 0-0 at the end of regulation. Marshall scored with 6 minutes left in the second 10 minute overtime period.  Gull Lake would score 2 minutes later to take the game to a shoot out.

Kate Face, Dani Devine, Chloe Leugers, Olivia Zulewski, and Katie Foster each made their shot in the shootout taking it to a second shootout.

Gull Lake kicked first and goalie Maddie Reynolds came up with a big stop. Next up was Lauren Terry. All we needed was Lauren to score and she did just that to give Marshall their first ever Regional championship winning the shootout 6-5.

Marshall now advances to the State Semifinals on Tuesday at Portage Northern and will face Forest Hills Northern.  Game time is 7:00 p.m.