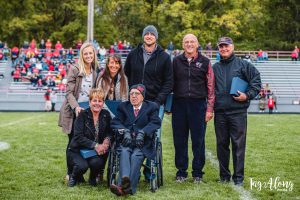 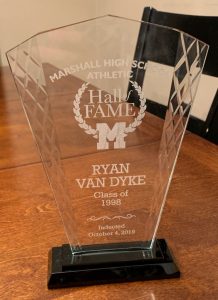 Again Congratulations to the Inaugural Class of 2019 for the Marshall High School Athletic Hall of Fame.  Special thanks to the Marshall Athletic Boosters for their efforts and sponsorship.  Already looking forward to the Class of 2020!

A baseball player at Western Michigan University, Joe Cooper led the Broncos to the 1948 NCAA Regional playoffs. While he was a WMU standout athlete, Cooper may be better known for his long-time commitment and devotion to Marshall Public Schools and Marshall Athletics. Joe served 35 years with Marshall Schools as a teacher, coach, principal, athletic director and assistant superintendent. Under his direction, Marshall baseball became one of the strongest programs in Michigan, leading teams to a 240-120 record with 12 conference championships.

Cooper also spent two years as manager of the Battle Creek/Muskegon Belles in the All-American Girls Professional Baseball League. Starting as a volunteer in the American Amateur Baseball Congress, Cooper founded the Connie Mack Program. He later served as an officer in the inaugural Michigan High School Baseball Coaches Association and upon his retirement from education in 1983, became president of the American Amateur Baseball Congress.

A recipient of the Dutch Fehring Award of Service, ABCA Award of Merit and the National Council of Youth Sports First Executive of the Year Award in 2004. He is a member of both the Western Michigan University and Michigan High School Baseball Coaches Hall of Fame. Coach Cooper continues to live in Marshall and can occasionally be seen in attendance at Marshall Baseball Games on the field that bears his name.

Brazilian born before immigrating to Michigan, Vic led Marshall playing football & basketball earning All-State honors in football. Vic excelled in basketball winning a Twin Valley Conference Championship. During his years at Marshall, Vic was also on the track & field team participating in shot put and high jump. Vic was a recipient of the Bill Holt Award his senior year.

Following graduation, Vic attended Michigan State University where his career culminated in a victory at the 1953 Rose Bowl. Following his college career, Vic was drafted by the Philadelphia Eagles. His professional career was interrupted when he was drafted into the US Army and served as an artillery trainer. After leaving the army, Vic returned to Marshall working in insurance and farming until his retirement.

A four-sport standout at Marshall High School and the Twin Valley in the mid-sixties, John participated in football, basketball, track & field and baseball. John started as quarterback for 3 years, earning the Most Valuable Player award in 1966. He was an All-Conference basketball player and All-Conference in baseball all 4 years. He was the first freshman to earn Twin Valley All-Conference honors. John was conference, regional and state champion in the 100 and 220-yard dash and was named to the Detroit News All-Class, All-State Track Team in 1967. John received the Bill Holt Award his senior year.

After graduating with high academic honors, John declined a scholarship to play baseball at Michigan State University to attend Harvard University where he was a 3-year letter winner in track & field. He was named to the All-Ivy League Outdoor Track & Field Team in 1970. John later attended the University of Virginia Law School. John is retired from a long and successful law career and has served on numerous non-profit boards. He currently lives in Grand Rapids with his wife Judith and remains a big Marshall supporter.

John played basketball and golf at Marshall, leading the golf team to the state tournament his freshman and junior seasons. John won the Michigan Amateur Golf Championship in 1978. He went on to attend the University of Michigan where he won the Big 10 in 1980, earning All-American honors.

After graduation, John was successful on the professional golfer’s tour, winning the Australian Open, Air New Zealand Shell Open, Hawaiian Open, Quebec Open, Nike Tour Event in Portland and finishing 4th at the US Open in 1996. He was inducted into the Michigan Golf Hall of Fame in 2006. John continues to live in Marshall with his wife Kelly.

Sal was a multi-sport athlete at Marshall High School earning 4 letters in basketball and track & field and 2 in volleyball. With multiple All-Conference awards, Sal was All-State in both basketball and track & field. She helped lead Marshall to the basketball finals in 1981 and was named captain of the Detroit Free Press Team. Sal still holds the Marshall shot put record and basketball record for points in a game, rebounds in a game, average points in a season and average rebounds in a season.

After graduation, Sal attended Alma College lettering in basketball, softball, track & field and field hockey. She was All-Conference in basketball winning 3 league championships and making 2 NCAA appearances. She also received All-Conference honors in softball and track & field and a league championship in field hockey. Sal was inducted into the Alma College Athletic Hall of Fame in 1996 as an individual and 3 times as part of a team (2 basketball and 1 softball). Sal started her coaching career in 1986 later serving as the Albion College Women’s Athletic Director and head basketball and softball coach from 1991 to 1995. She then returned to Marshall, coaching basketball and softball serving as head girls basketball coach from 1999 to present, with over 300 varsity wins and a State Championship in 2016. She lives in Marshall with her husband Steve.

Oldest of the VanDyke siblings, Ryan was a standout football and basketball athlete. Three time All-Conference and 3 time All-State in football, Ryan led Marshall in back to back state finals, winning a state title in 1996. Ryan was named to the Football Dream Team in 1997. In basketball, Ryan was a 2-time All-Conference selection and earned All-State as a senior, playing in the basketball state finals his senior year. Ryan won the Bill Holt Award as the Best Male Athlete at Marshall in 1998.

After graduation, Ryan attended Michigan State University, playing quarterback for the Spartans from 98’ to 2001. Ryan went on to play for the Seattle Seahawks and New York Giants after college. Ryan played in NFL Europe with the Cologne Centurions, the Los Angeles Avengers and Grand Rapids Rampage of the Arena League. Ryan currently works providing specialty quarterback training as a partner with QB University. He lives in Howell, Michigan with his wife Katie and their 3 young sons.

Sara participated in cross country, swimming and track & field. While at Marshall, Sara earned All-Conference and All-State in 1998 and set the school record in cross country. Sara was a 4-year letter winner in track & field, earning All-Conference honors 7 times and setting school records in the 1600m and 3200m. As a member of the Marshall Swim team, Sara set records in the 200m medley relay and achieved All-State in the 200m Medley Relay as well as Academic All-State.

After graduation, Sara attended the University of Central Florida earning a BS in Nursing in 2004. While at UCF she was awarded 8 letters, 4 in cross country and 4 in track & field. She was named Freshman of the Year in cross country in 1999 and Runner of the Year in 2003. Sara continued to run after college graduation, winning multiple marathons and qualifying for the Boston Marathon twice. Sara lives with her husband Geoffrey in Santa Barbara, California.

Sarah was a three sport standout for Marshall in basketball, volleyball, and soccer, serving as team captain of each sport her senior year. Sarah earned All-District, All-Area and All-Division honors in basketball. Sara was All-Region, All-Area, All-Division and All-Conference in volleyball. Sara earned All-Conference, All-Division, All-Area and All-District honors in soccer all 4 years. Sarah was named All-State in soccer for 3 years. She was a nominee for the Wendy’s High School Heisman Award and received the Bill Holt Award her senior year.

After graduation, Sarah attended Wheaton College and played soccer.  During her time at Wheaton, Sarah won 3 National Championships and served as team captain. She was honored in the Top 30 NCAA Woman of the Year in 2007 and ESPN the Magazine Academic All-American of the Year. Sarah currently lives in Wheaton, Illinois with her husband Tim and their 4 children.