Nearly all the lanes at M66 Bowl were in use. There was a drone in the building, the chatter of a hall full of high school bowlers, interrupted by the occasional crackle of a bowling ball hitting pins.

Christy Thayer sat among the parents there to see the weekend MHSAA tournament. She had a big smile on her face, and not just because she was watching her son Caden LaTour taking his place in the wave of bowlers.

She was smiling because Caden, who has autism, was just another athlete among the group from Marshall High School, lining up with his team in their lane in his red and black Redhawks team shirt.

“He is usually really quiet and reserved and stays separate from everybody,” Thayer said. “But being part of the team makes him get included with this crowd. This would normally be a stressful thing for him, but he handles it very well because he loves it. He just loves bowling and he loves being part of the team.”

Caden is a senior on the Marshall High School bowling team, competing with the junior varsity squad in his first season in the sport at the MHSAA level. He is also part of the special education program at Marshall High School. And, while he has participated in bowling in the Special Olympics since middle school, being a part of the high school team is the next level for him. 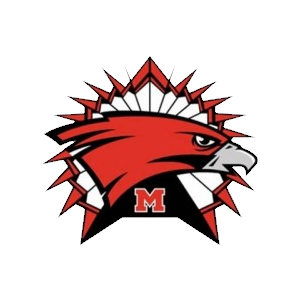 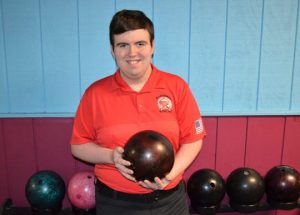 “This is different, being part of the team at the high school. It’s kind of cool. It’s a big step and he’s doing pretty well with it,” Thayer said. “I was nervous as first. It always makes you nervous when your child starts a new adventure, with any child, let alone one with special needs. So I was nervous when he said he wanted to do this.

“But I am proud of him for what he is doing.”

Caden, whose autism lends itself to him being quiet and answering questions in one or two word spurts, lit up when asked about bowling.

Sue Hutchings, in her 21st season as the coach of the boys and girls high school bowling teams at Marshall, says the sport is a good fit for him.

“I feel like this is a sport that has always accommodated athletes that may be non-traditional or might have physical disabilities. The first state champion we had in the state in Class A only had one hand and bowling was a good sport for him to participate in,” Hutchings said. “And now we are seeing more cognitive-type situations. I think it’s a sport that works well for individuals who like repetition, like structured environments and can compete with their peers on the same playing level.

“Practically every tournament I have been to this year has had athletes with special needs.”

Caden, 18, is the lone senior on the Marshall team and will graduate from high school this spring, but Hutchings has known him since he was young.

“In middle school, his special education teacher would bring a group to Marshall Lanes to practice, and I remember Caden always being a cheery young man who loved bowling,” Hutchings said. “When his teacher in high school this year asked about him joining the team, I said, ‘Of course, that’s a great idea.'”

Hutchings adds that Caden also likes being ‘one of the guys.’

“As far as being part of the team, we don’t treat him any different. If he misses a practice, he doesn’t get to play,” Hutchings said, and his mom adds that’s how she wants it. “But when he does miss anything, he always says to me the next day, ‘Did you miss me?’ And I always find myself saying, ‘Yes, Caden I missed you, because you are always smiling.'”

Hutchings says having Caden on the team is also helpful to his teammates.

“I think it brings a lot of community to the team. They embrace him. Whenever we have had athletes with special needs, the team always looks to protect that player and help them when they need it. It’s good for everybody,” Hutchings said.

Thayer says her son is an average bowler when he focuses, but the end result isn’t as much about the pin count as it is the experience and growth she has seen in him as a person.

“He is just so excited about being part of the team. He went out to find out everything he could about bowling, did his research before he started the season… You can ask him anything you want about Brunswick and he knows it,” Thayer said with a chuckle. “This has been a big step for him. I think it’s a big deal and a big part of what he needs to do for him to graduate into adulthood in the next year, which is what we want.

“I just find myself smiling when I watch him bowl as part of this team. It’s been great.”