The Marshall Girls Soccer Coaching Staff would like to thank and honor the Class of 2020.  Although the coaches and seniors are heartbroken about not having their senior season, there is much to celebrate about these young ladies, individually and collectively. 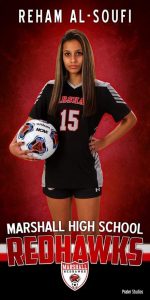 Reham was going to be a 1st year varsity member.  Reham was blessed with extremely good quickness and agility.  As a result, she was an excellent 1 v 1 player and the coaching staff was looking forward to having her as part of the program and watching her progress. 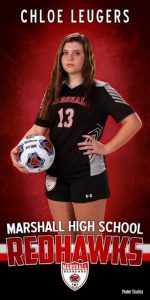 Chloe transferred to Marshall after her sophomore season.  She was a member of the 2019 Girls Varsity Soccer program. She is extremely coachable and hard-working.  She is a gifted player that quickly became a key part of the 2019 team and was looking forward to being a starter and a leader this fall.  Chloe scored several huge goals during the team’s state tournament run in 2019 and, as mentioned earlier, was posed for a great senior season.  She was a key part of the 2019 team that was I-8 Champs, District Champs, Regional Champs, and State Semi-Finalist. She was also selected as Honorable Mention for the Battle Creek Enquirer All-Area team in 2019. 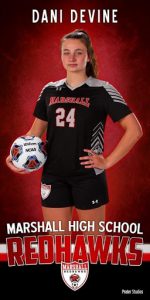 Danielle was a 4-year member of the Girls Varsity Program.  She started all three years and was a dominant force on the field with a terrific work ethic.  During her career, Danielle was part of three I-8 Championship teams.  She was also part of District Championship teams in her freshman, sophomore, and junior seasons.  She was a key part of trips to the regional final as a freshman and sophomore before claiming a regional championship as a junior and advancing to the state semi-finals.  One local college coach referred to her as the “the best defensive midfielder in the state” during her junior year. As a sophomore and a junior, she was selected by her teammates as recipient of the “Unsung Hero” Award.  She was a 2-time All I-8 performer and twice selected as a member of the Battle Creek Enquirer All-Area team. Her junior year, she was also honored as an All-District player. She was selected as a captain of the team for her senior season.  During her career, Danielle helped Marshall enjoy a 54-10-7 record, including 12-3-0 in the state tournament. 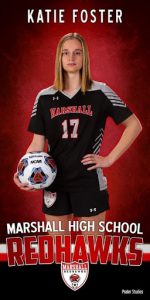 Katie was also a 4-year member of the Girls Varsity Program.   She announced her presence in the program with a bang, scoring the 1st goal of the season her freshman year (in her 1st varsity) game and continued to be an offensive force throughout her career scoring in the last game of her varsity career as well, in the state semi-final as a junior.  Katie was one of the hardest workers on the team and served as a captain in her junior and senior seasons. Katie was also a 3 time I-8 Conference Champion and District Champion.  She also advanced to the Regional Final as a freshman and sophomore before being part of the Regional Championship team her junior year and advancing to the state semi-finals. Katie was named to the All-District team 3 times.  As a sophomore she was named to the Battle Creek Enquirer Honorable Mention All-Area team and was named as a member of the All-Area team as a junior. In her junior season, she was also selected by her teammates as the “Most Improved Player” and also earned All-Region and 1st Team All-State honors as well.  During her career, Katie helped Marshall enjoy a 54-10-7 record, including 12-3-0 in the state tournament. 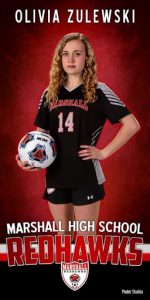 Olivia was also a 4-year member of the Girls Varsity Program.  For four years, Olivia has been one of the fittest and hardest working members of the team.   She was a 3-year starter. Olivia could play every field position at a very high level. She is the only player in the past 6 years to have played meaningful, competitive, high-level minutes at every field position for Marshall’s program.  Like Danielle and Katie, she is a three time I-8 Conference Champion and District Champion. She was also a member of the teams her freshman and sophomore years that advanced to the Regional Finals and was a member of Regional Championship winning team that advanced to the State Semi-Finals her junior season.  As a freshman, her teammates voted her as the “Best Newcomer” to the program. She followed that up by being selected team MVP by her teammates as a sophomore and junior. As a sophomore she was selected to the Honorable Mention I-8 All Conference and Honorable Mention Battle Creek Enquirer All-Area team. She was an I-8 All-Conference selection as a junior and a member of the Battle Creek Enquirer All-Area team.   She was selected as a member of the All-District, All-Region, and All-State teams in all three seasons.  She was selected to be a captain of the team in her senior season.   In her three years, Olivia helped Marshall enjoy a 54-10-7 record, including 12-3-0 in the state tournament.

These seniors have left a great mark on the program.  They have helped propel it to new heights. They are great players and great young ladies.  While we are incredibly sorry that they will not get to play out their senior season that we all had such high hopes for, we thank them for the incredible contribution on the field, all the memories, and, more then anything else, their friendship and dedication.  We know that they will continue to succeed as they move forward in life and we wish them nothing but the best.