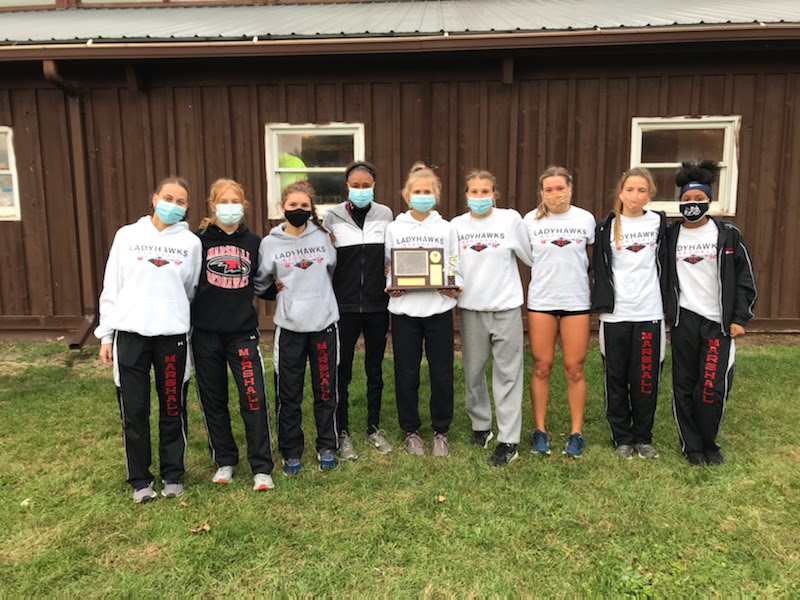 The Marshall Ladyhawk Cross Country Team advances to next week’s Regional Championship Meet with their first-place finish in the Pre-Regionals this Saturday, in Vicksburg. With temperatures in the crisp mid-thirties at run-time, Marshall once again dominated the meet, taking six of the first twelve places. Maliyah Gore led the Ladyhawks to the win, finishing 3rd overall in 20:13, just one second ahead of 4th place finisher, teammate Brooke Waito. Shawn Brophy finished six seconds after Waito to grab 5th.  Abbie Schoepke finished 8th in 20:38, Zariah Ozuzu was 11th in 21:00, Anna Zacharski finished four seconds later, in 12th place at 21:04. Natalia Egnatuk rounded out the varsity seven, taking 25th place in 21:50.

The Ladyhawks maintained their edge over the competition this week by doing again what they’ve done so well all season, namely, pushing each other through the course, finishing among the first runners in, and then bringing their next four finishers across the line one after another. I can’t say for certain that having the lowest team spread—in other words, the least amount of time passing between the team’s first runner in and its fifth—guarantees a team win, but that has been the case for the Marshall Girls team in every one of this season’s meets. In Vicksburg, that spread was just 46 seconds. (Second place Parma Western’s team spread, for comparison, was more than double that, at 1:50.)

The Marshall runners bested six teams Saturday for the win, improving their overall record to 79 – 0. They run next Saturday, Halloween, at 11:30 a.m. at Portage West Middle School for the Regional Title and a chance to go to States.