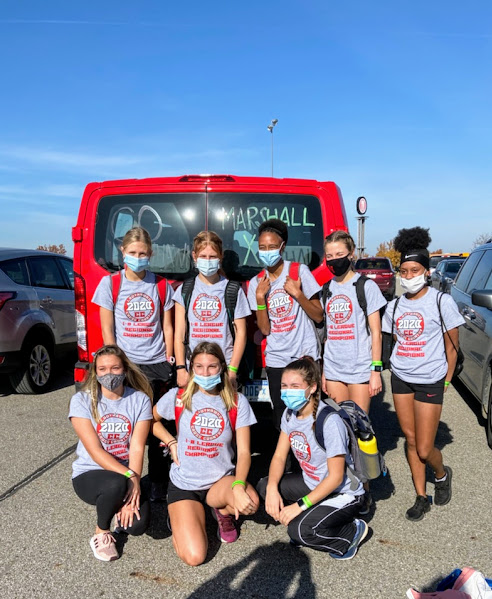 Your Ladyhawk Cross Country team ran their final race of a memorable season on Friday, November 6, at the Michigan International Speedway in Brooklyn, as they faced down the top teams in the state for a shot at the State Championship title. The girls entered the race ranked in the middle of the pack, and they held that spot through the finish, placing 15th out of the 27 competing teams—the best finish for the team in a number of years.

In a year like none other, getting the team to the State finals was always a goal but never a guarantee. There was no telling what the season would bring, back in June, when the girls began meeting five and six days a week for off-season training. From the start, it was unclear if there would be a season at all, or if the optional summer practices would be all there was to it.

So the girls showed up—a dozen or more, every day—and they ran their tails off, knowing all of it could come to an end at any moment. The idea was to keep going as long as possible, to give it their all, to outrun uncertainty and the threat of infection, to make it through each day, each week, the best they could, and hope the next day would bring more.

And, day after day, despite bumps in the road, the team navigated the terrain with grace and grit. Summer turned into fall, and the season got underway.

“It was an amazing season, and I feel very blessed to have had the opportunity to work with this incredible group of young women,” Coach Wissink said. That the season happened at all is a wonder and a gift—it could easily not have. Many thanks are due to Marshall Athletic Director Dan Coddens, who worked incredibly hard to ensure that fall sports took place in the safest manner possible and who supported coaches and teams to make it happen, rolling with schedule changes, quarantines, and many other challenges along the way.

The final challenge, after a season filled with them: Coach had an unexpected health complication arise just before the team was set to depart for the State Championship meet, leaving him unable to accompany the team to their biggest race of the year. Heartbreaking doesn’t begin to describe the situation. But the girls and Coach, once again, took it all in stride. Kim Robson, who works as a guidance counselor at MHS and whose sons ran cross country, immediately agreed to take the girls to the meet. “She really saved the day,” Wissink said. “I am very indebted to her.”

“Running at the State Meet is very intimidating, and we hadn’t really been tested by top-notch competition all year [due to more challenging meets being cancelled due to COVID-19 and related restrictions]. As I told the girls when I contacted them after the meet, I was incredibly proud of them all season, and particularly today.”

At State, Marshall was led by Maliyah Gore, who placed 51st. Also scoring for the Ladyhawks were Camille DeCola in 56th, Brooke Waito in 66th, Abbie Schoepke in 71st, and Shawn Brophy in 73rd. The girls did what they’ve done successfully all season, finishing within 40 seconds of each other. Also finishing for the girls were Anna Zacharski in 99th and Zariah Ozuzu in 114th.

“I couldn’t be prouder of these girls” said Coach Wissink.  “They’ve faced so much adversity this season, including at the State Meet, but they always rose above it and performed in a way to make Marshall proud. We are really going to miss our seniors Maliyah Gore, Abbie Schoepke, Anna Zacharski, Natalia Egnatuk, and Hannah Peterson. It will be really different next year after losing all the talent and leadership these girls have provided, but we have a great group returning and look forward to another great season next year.”

Besides their athletic accomplishments, the Ladyhawk runners take pride in achieving Academic All-State, with a 3.814 team GPA. Junior Brooke Waito and senior Abbie Schoepke also made Academic All-State individually, by maintaining a GPA above 3.8 and finishing in the top half of the field. Congratulations, ladies!

Of her four years running on the varsity cross country team, Abbie Schoepke says that she has no regrets. “Now that it’s over, I can say it was a great run (literally!), and I learned that I loved to run as well.” She stresses the importance of the friendships she formed through running, and how those friendships, those teammates, made the challenge of running cross country both worth it and possible.

As parents of freshman runner Camille DeCola, Angie and Jake DeCola couldn’t have asked for a better experience for their daughter. “Cross country really kept Camille going this fall. It was a bright spot in a bleak time, and gave her something to work hard at, as well as allowing her to deepen friendships and form new ones. Having such an experienced, dedicated coach who really knows how to get the best out of each individual girl—we feel so lucky.”

In the off season, there will be time for rest, time for recovery, and time for rebuilding. The team has every intention of moving forward with the same resiliency and determination that made this one such a winning season.

“I pray that over the next few months we can work together to get the virus under control and our kids can get back to a more normal life,” Coach said. “And watch out for those Ladyhawks in the fall of 2021!” 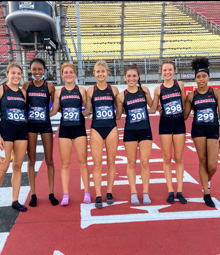 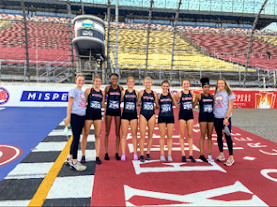