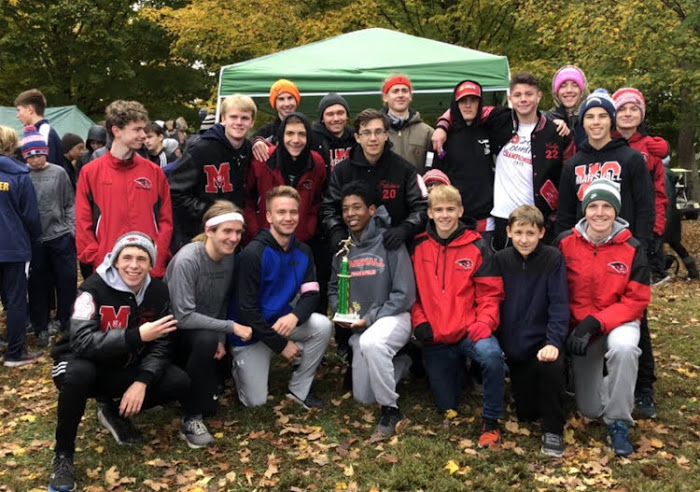 The Marshall Boys Cross Country Team brought home the third place trophy at Saturday’s meet in Dexter. In a field of twenty teams, the guys were able to run some of their best times of the season. “This is a great lead up to our next two races, ” said Coach Casagranda. “We have talked all season about focusing on October. This is the time to peak! The guys race next Saturday at Turkeyville to determine the outcome of the I-8 Conference and the following Saturday’s race is the determining factor as to whether we race at State Finals or not.”

In a team of seven seniors, Perry Robson was Marshall’s first runner, placing 11th. Conor McPartlin followed closely in 14th. Both runners earned medals and were able to drop their times into the 16’s for the first time this season, running 16:53 and 16:56 respectively. Emmett Rosenzweig placed 26th, Tim Fouty 29th in a personal best time of 17:29, Spencer Zick 34th also ran his PR of 17:36, Paul Radulescu placed 54th. Brendan Tekiele rounded out the Marshall seven running a personal record of 18:31.